How to Improve Return on Sales With an Archer's Mindset

Singular decisions we make when building sales teams have the most visible impact of all. Deciding whom to hire can be daunting because the cumulative outcomes of individual hiring and promotion decisions forge the very foundation of revenue production.

In fact, the highest performers’ results are so superior, their addition can signal the rise of an organization, and their departure can portend decline and even organizational death (Bedein & Armenakis, 1998).

Considering these individuals’ importance, let’s look at how adopting an Archer’s Mindset can help improve sales performance results.  I highly recommend reading How to Decide: Simple Tools for Decision Making by Annie Duke, wherein she discusses The Archer’s Mindset as a concept for decision-making.

First, consider the reality that the results of a single high-performer sales rep can easily be 10-20 times greater (and sometimes even much more) than a mid-performer.  Each ‘shot’ at hiring matters immensely, and an executive must approach these decision-making processes with a high degree of vigilance and rigor.  Ideally, decision-makers should remain diligent and attentive not just at the moment of firing the shot but also after the shot lands.

Aiming for the Best: An Archer’s Approach to Return on Sales

Since people are so complex, decisions involving them always brim with complexity too.  As my Grandpa used to say, “business would be easy if it wasn’t for the people.”  At the end of the day, when you make a decision about whom to hire in a sales role, it’s impossible to have absolute certainty about the outcome.  There are some things that are outside of your control.  You’ll make guesses and take chances, and you won’t always be right.

Think about your guesses the way an archer thinks about a target.  Archery is not an all-or-nothing game where you only get points for hitting a bullseye, and everything else is a failure.  An archer still gets points for hitting the target, even with an imperfect shot.

Similarly, when you make guesses (some of them educated), they are like arrows.  You aim at the bullseye, and though you’re likely to miss perfect center, you earn more points the closer you get.  In other words, the more careful your aim is and the more ‘educated’ your guesses are, the better your outcome will be.

The most important thing is to be intentional when you take aim.  Envisioning the direction and angle of your shot, gauging wind speed, and adjusting tension on the string motivates you to improve.  It compels you to assess what you do right (what you know), and where you fall short (what you don’t know).

Off-Target: Return on Sales is Missing the Mark

Analyze individual arrows and groupings of arrows to gain insight, advantage and continuous improvement.  Realize that improving the knowledge behind individual guesses and adding input to the process are cumulative means of getting arrows closer to the bullseye.  You’ll still miss sometimes, but you’ll miss less often and by smaller margins.

The image below represents the actual distribution of sales performers from a recent study of a sales team.  Imagine that each of the salespeople and their results are the places where the archer’s arrows hit the target, with the far-right representing a bullseye.  This uneven distribution represents a norm, not an exception. 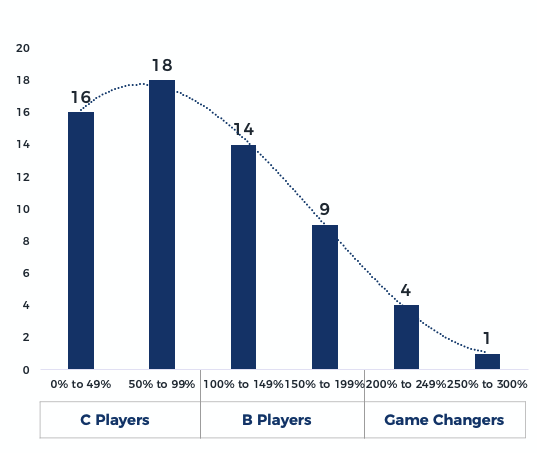 Obviously, when the hiring manager and executives draw back the bowstring to launch the arrow (start the hiring process), they are aiming to land all of the arrows in the game-changer bullseye.  What went wrong?

Remove the Blindfold of ROI Complacency

Developing an Archer’s MIndset allows the hiring team to maximize better outcomes in the future.  They can analyze each input and ask themselves what they need to learn to move across the continuum.  Mastering the Archer’s Mindset can help them move away from ‘pure guesses’ with little knowledge and closer to perfect knowledge by narrowing focus to factors that best predict where the arrow will land.  This constitutes consciously ‘taking aim.’

One of the biggest benefits of the Archer’s Mindset, of fixing your aim, is that it prompts you to ask these two questions:

Taking stock and intentionally refining your aim will spur you to chase the answers you need.

Think about the financial reward for making these improvements.  Let’s consider a company that employs 100 Account Executives against a target quota of $60 million in annual revenue.  For simplicity, consider $100K per-person as the base-compensation to deploy this team.  Here is how that investment returns capital: 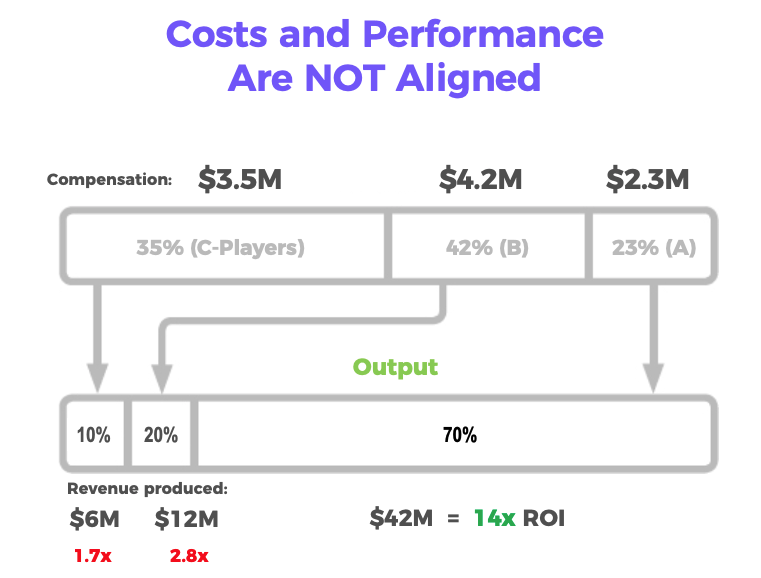 On the face of it, this is preposterous.

An Archer’s Mindset would not accept 77% of the arrows missing the bullseye of high-performance.  Why do executives tolerate a degree of inefficiency in the deployment of sales talent that is objectionable in any other part of their business? 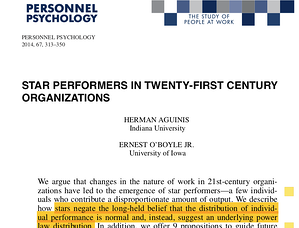 In 2014, the Journal of Personnel Psychology published research by Herman Aguinis from Indiana State & Ernest O’Boyle from University of Iowa under the heading: Star Performers in Twenty-First Century Organizations.  This research reveals the ubiquity of a long-held yet inaccurate belief that the distribution of individual performance is normal.  In reality, a few star performers’ disproportionate eminence suggests an underlying power-law distribution.

In layman’s terms, although a star performer’s production is extraordinary (sometimes 10-20x higher), their prevalence is not (O’Boyle & Aguinis, 2012).  Management systems tend to view these stars as anomalies to ignore while concentrating on normal producers. (Aguinus, Gottfredson, & Joo, 2013)

The same goes for the top performer in a sales organization.  The compounding effects of SaaS revenues or recurrent revenues that top performers produce are exponentially greater than low-performers’.

This one element of identifying what makes someone a star performer in your selling environment is central to competing in and dominating your market.  Indeed, minor differences in performance create dramatic differences in business valuations (Kelly & Caplan, 1993; Lepak, Takeuchi, & Snell, 2003; NArin, 1993; Rosen, 1981).

In the past, relying on work history, structured interviews, references, and online personality assessments were key inputs for hiring decisions.  Because these methods fail to significantly improve the number of shots hitting the ‘bullseye,’ leaders also shortsightedly depend on gut and intuition in the final decision on whom to add to the sales team.

“Despite the widespread belief in intuitive expertise, the data suggest it is a myth.  Experience does not statistically improve a manager’s ability to predict a hire’s performance.”

Researchers Conway, Jako & Goodman (2012) report, “existing evidence suggests that interrater reliability of the traditional interview is so low that, even with a perfectly reliable and valid criterion, interview-based judgments could never account for more than 10% of the variance in job performance.”

Sharpen Your Aim: Hone in on More ROI Game-Changers

Fortunately, there have been significant improvements in the analytical data tools that can assist leaders in analyzing their shots and taking aim.  One such tool leading the way is PerceptionPredict.  PerceptionPredict ingests massive amounts of data to yield predictions of future potential to advise leaders making hiring decisions.  We call this prediction a Performance Fingerprint. 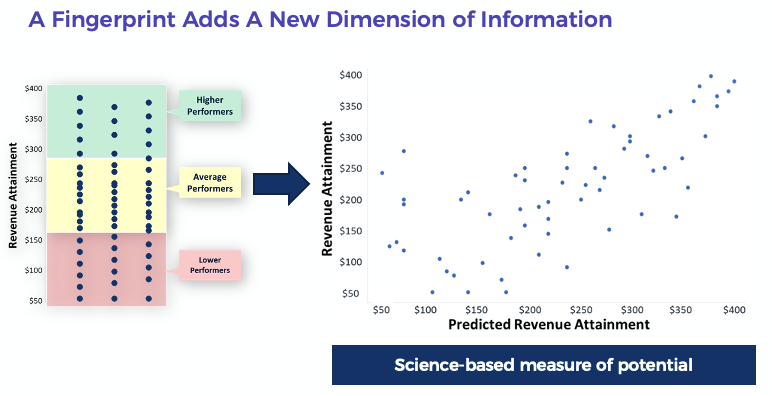 This predictive capability came from the mind of I/O Psychologist Regina Chou and her team of data scientists.  She observed the rapidly expanding ability of human sciences to understand human traits.  Then she noticed the disconnect between understanding these human characteristics and connecting them directly to business performance on a per-individual, per-company basis.

What is the solution to this disconnect?  Harness the business intelligence locked up in companies’ existing data systems to correlate which human attributes are functionally contributing to performance on an individual level.  Through deep statistical analysis, machine learning, and other complex processes, the PerceptionPredict.ai platform gives executives continuously-sharpening insight into which of the over 400 measured attributes truly matter in their company.

That’s how PerceptionPredict empowers companies to sell to customers based on a forensic observation and deconstruction of shots they have previously aimed.  PerceptionPredict’s surgical precision eradicates the need for the broad, assumptive application of psychographics.  The Performance Fingerprint is a bespoke, custom algorithm designed for each target role within a company.

Bullseye: Data Launches Return on Sales to the Next Level 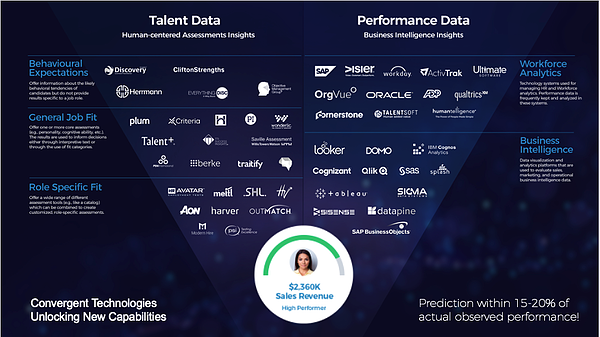 This revolutionary combination of two existing technologies has unlocked the ability for executives to quickly evaluate in whom they should decisively invest.  Deploying intelligence platforms in the decision-making process is enabling leaders to consistently land their arrows within 15-20% of their targeted goal.

Equally important, this helps fill in the knowledge gaps about what plays into the hit or miss of each arrow.  For example, one major electronics retailer believed that there were two critical attributes to consider when hiring a retail store associate: customer orientation and an affinity for technology.  They had built a robust process around screening for these attributes.

However, deep analysis of the data revealed no correlation to customer orientation, meaning those two attributes did nothing to predict success in the role.  More surprisingly, and damaging to their efforts, was the finding that the higher someone’s affinity for technology, the poorer they performed.  This is a classic example of how relying on gut and intuition can lead to poorly-aimed arrows that miss their target.  Once the leadership zeroed in on the 14 facets operationally driving performance, they were well on the way to consistently hitting the bullseye.

When adopting the Archer’s Mindset to improve the ROI of a sales team, make sure you examine all of the intelligence sources that can inform your educated guesses and direct your aim.  Every speck of insight is a cumulative advantage in confidently placing your arrows as close to the bullseye as possible as frequently as you can.

Never accept that 77% of your arrows are destined to veer off-target.  Commit to becoming an Olympic-level archer who reliably fires off arrows landing on bullseye with decisive precision.  The rewards are beyond worth it.

Need help sharpening your hiring aim?  You’re in the right place.  PerceptionPredict can be your next arrow for targeting bullseye performers.  Book a demo today to learn how.

How Long Does the Average Person Stay at a Job (and How to Increase It)
Eight Unfair and Discriminatory Hiring Practices That Go Unnoticed
What Are the Qualities of Top Sales Managers?
Bias Eraser #4: Conformity Bias
Bias Eraser #8: Primacy & Recency Effects